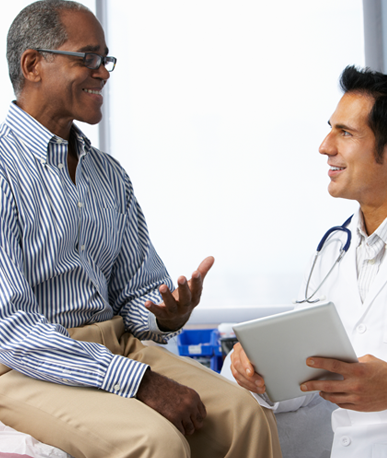 Poverty has a myriad of pernicious effects on health, including higher incidence and mortality for most forms of cancer. Colorectal cancer (CRC), the second overall leading cause of cancer death, is no exception. CRC is diagnosed 40% more often in those lower in socioeconomic status (SES). In the United States, race and SES are inextricably linked, leading to profound health disparities. CRC incidence is 20% higher in Black men as compared to white men with death rates 52% higher. Because the precancerous polyps that cause most CRCs grow slowly, adherence to CRC screening can prevent most cases from becoming invasive cancer. Unfortunately, use of screening tests is inadequate, especially among low SES African American men. Most existing approaches to increase CRC screening in this group utilize in-person or telephone-based education and patient navigation. While effective, these approaches are costly and resource intensive, limiting their adoption among organizations that primarily serve low SES African American men, such as Federally Qualified Health Centers (FQHCs). To address the need for an effective, affordable, and scalable intervention to increase CRC screening among medically underserved African American men, this project will develop a theory-based, tailored, and culturally-targeted CRC screening mHealth intervention for this group. The intervention will be based on the health belief model (HBM) and delivered via mobile phone. It will include text messages designed to improve CRC knowledge and health beliefs. Additionally, the program will present three web-based video components: scripted vignettes, unscripted peer narratives, and educational instruction. Finally, it will be culturally targeted by contextualizing HBM constructs with the health beliefs most relevant to low SES African American men and by integrating gender- and race-congruent imagery, language, and values.